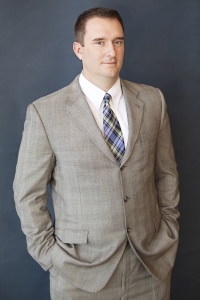 Aaron Finter is an attorney practicing in the areas of real estate, commercial and general litigation.

Education and Honors: Aaron completed his undergraduate studies at Kansas University and in 1995, earned a B.A. in Psychology. He received his Juris Doctor from Washburn University School of Law in 2000, graduating with Honors. During law school, Aaron worked as an intern and student director for the Washburn Law Clinic.

Professional Activities and Experience: Aaron began his practice of law with a large firm in St. Louis, Missouri. After relocating to Arizona in 2003, he focused his practice on real estate and commercial litigation matters. Aaron has represented homeowners, real estate professionals, title companies, lenders, landlords, tenants, and contractors. Aaron has assisted his clients in dealing with residential and commercial purchase contracts and leases, licensing issues, land subdivision, title issues, property tax disputes, construction law, and mechanic's liens. He currently serves on the board of the Phoenix chapter of a national not for profit legal society. Aaron has also served as a Judge Pro Tem for the Maricopa County Superior Court.

Personal: Aaron is married with children. He is an ATV enthusiast and enjoys hiking, camping, competitive shooting, and hunting.